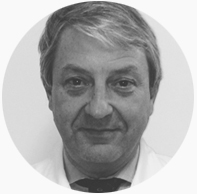 He spent time abroad at various universities to broaden his knowledge in the field of hip surgery. He attended the Hospital for Special Surgery, New York, USA and the Johns Hopkins University, Baltimore, USA. In 1990 he was a Research Fellow at the Mayo Clinic, Rochester, USA, for one year. In 2000, he attended the Royal Orthopaedic Hospital, Birmingham, Great Britain in order to learn the technique of hip resurfacing under the guidance of Dr. Derek McMinn.

From 1986 till 2011, he practiced surgery at the Rizzoli Orthopaedic Institute in Bologna. His main areas of interest are hip and knee surgery. He has performed over 10,000 surgical operations as primary surgeon. Of particular importance is the hip resurfacing technique he uses which is an alternative to total hip arthroplasty. This technique preserves the femoral head, thereby allowing patients to recover quickly and enabling them to carry out activities including sports. He has carried out over 1,500 hip resurfacing procedures, which is the largest number of cases performed in Italy and one of the largest in the world. He has developed innovative biomaterials to improve the fixation of implants in elderly patients with biomechanically weak bone. It is also now possible to carry out hip resurfacing in elderly patients with good bone quality. In addition, he has performed over 400 knee surgeries using computerized planning and has carried out more than 200 hip and knee revision surgeries.

To books a specialist orthopedic examination with Professor Antonio Moroni please contact weekdays, from 14:00 to 19:00, the Secretariat: